Background: Cubitus varus is commonest complication of paediatric supracondylar humerus fracture. These deformities are most commonly result of malunion, however avascular necrosis of trochlea or growth arrest of medial physis may also cause the deformity. Cubitus varus mostly presents as cosmetic deformity but it may also cause posterolateral instability, increased risk of secondary fractures, tardy ulna nerve palsy and snapping elbow. Current trend is to offer surgical correction for cubitus varus deformity in form of supracondylar osteotomy of the humerus. Various kinds of surgical approaches, osteotomy configuration and fixation methods are described in literature. The main guiding principles in deformity correction should be complete correction of sagittal varus deformity, correction of hyperextension deformity in older children. Rotational deformities may not be corrected but some authors do recommend triplanar correction. In our view lateral closed wedge oblique equal limb osteotomy fixed with reconstruction plate offers best results and is enough to treat most of the cubitus varus cases with minimal complication.
Keywords: Cubitus varus, osteotomy, complications.

Introduction
Cubitus varus or gunstock deformity as it is commonly known is the most common complication of displaced supracondylar fractures in children with an incidence ranging from 3% to 57% [1]. The deformity involves not only loss of coronal alignment to make the distal forearm and hand deviate to the midline of the body ,but also has recurvatum deformation in the sagittal plane and internal rotation deformity in the axial plane. Recurvatum deformity is in the plane of motion of the joint and remodels well. The internal rotation deformity is compensated by shoulder movements and is tolerated well. Both these deformities may not require corrections and most of the times correction is focussed on coronal plane deformity.
Malunion seems to the cause of the deformity in majority of the cases, though very rarely growth disturbances in trochlea or avascular necrosis of trochlea may cause progression of the deformity. The causative factors for malunion are:
1. Impacted / comminuted type I supracondylar fractures
2. Rotationally unstable type II fractures treated in a cast with subsequent loss of reduction
3. Poorly stabilised or reduced type III fractures or delayed neglected fractures

Should we correct these deformities?
The clinical presentation of a child with cubitus varus is usually an unsightly deformity with a reasonably good ROM at the elbow. Although some studies have reported asymmetrical flexion arc with limitation of elbow flexion range on affected side [3] but functional arc was maintained. This led most authors to believe that the deformity has no functional implications
However studies have shown that long term follow up of children with cubitus varus may result in a problems such as increased chances of lateral condyle fractures or other secondary fractures, posterolateral elbow pain and instability, tardy ulnar nerve palsy [4-9]. There are some reports of alteration in morphology and alignment of the elbow joint in cubitus varus, but the clinical significance of the same is still debatable [a] Cosmetic appearance still is the most common cause why the parents bring their child to clinician. The above mentioned complications along with cosmetic concerns justify surgical management, although many times this deformity is neglected and patients are asymptomatic. In fact there are two of our colleagues (orthopaedic surgeons) who have cubitus varus deformities and they do not wish to correct it. On the contrary they mention that it is an advantage to them as their rotational profile helps them to extend their reach during surgery, specifically while operating on pelvi-acetabular fractures. Thus, although the decision making tips more in favour of surgical correction of deformity, the treatment should be individualised.

What surgeries are available?
Most authors now recommend surgery in the form of corrective osteotomies to achieve a normal carrying angle. At times in cases with physeal arrest in young child, epiphyseiodesis is needed.
Various types of osteotomies have been described each claiming improvements in cosmesis as well as lesser complication rates with their techniques. The osteotomies described are lateral closing wedge osteotomy [10], French modified osteotomy [11], medial open wedge osteotomy [12], lateral oblique osteotomy [13], lateral Equal limb osteotomy [14], step cut osteotomy [15], dome osteotomy [16,17], distraction osteogenesis [18,19]. Many variations of these main techniques are reported in literature [20-27] but essential principles remain the same. The first osteotomy described by Siris was simple lateral closed wedged osteotomy [10] which was modified by French to have intact periosteal hinge and fixation with screws and tension looped steel wires [11]. This was reported to have a lateral prominence which increased with increasing deformity. This was tackled by doing an oblique osteotomy with both arms slanting proximally from the medial epicondyle in such a way that the contact dimensions of both proximal and distal ends are approximately same (equal limb osteotomy) [14]. A step – cut was included by some to add stability, however it simply adds more contact surface and helps in good healing [15]. Dome osteotomies can correct large magnitude of varus but are limited in rotational and extension deformity correction [17]. Three dimensional osteotomies and ilizarov fixators are described by some authors but has not gained wide clinical use [28,29].

When to do the Surgery?
Surgery should be done only after allowing for maximum remodelling. A rough estimate will be around a year after the original injury. Again patients demands, growth potential and status of physis should be taken into account while planning surgery.
Surgical Approach. Three surgical approaches are described namely medial [30], lateral [11,13] and posterior [20,31]. Lateral approach is most frequently used as it provides good exposure with less dissection. Complex osteotomies may require posterior approach which offer more extensive exposure [31].

Which deformities need correction?
As mentioned earlier cubitus varus is a triplanar deformity with components of varus, hyperextension and internal rotation. There still exists significant debate over the deformities that need to be corrected. In younger child the hyperextension deformity will remodel with time and some authors recommend correction of hyperextension in children beyond 10 years of age as the remodelling potential is less after that [32]. Rotational correction has been advocated by authors who propose triplanar osteotomy to correct all three deformities [28,29]. However other have raised questions on using such complex procedures and have commented that rotational deformities need not be corrected at all [32]. The final decision will depend on surgeons experience and choice. We believe a sagittal plane correction of varus by lateral closed wedge osteotomy will be enough in most cases with addition of hyperextension correction in older children.

What Fixation modalities to stabilise the osteotomy?
Stabilisation methods vary from simple above elbow cast, k wires, single or double cortical screw, Screws with tension wire loops, plates and external fixators [11-29]. Smooth K wires are reported to back out with loss of fixation and a threaded wire of Steinmann pin would be more appropriate. Wires should be used in younger child with smaller bone and should be used with postoperative cast support. In older child single or crossed screws can be used. Inadvertent translation is a possibility while passing the screws and should be taken care of. Use of screws with tension band wire loop was proposed by French. This method should be used only when the medial cortical and periosteal integrity is maintained [ie the osteotomy is not complete]. In cases where the osteotomy is complete this method may fail with chances of loss of fixation. Also this method does not allow rotational or translational correction. Osteotomies in older children may be stabilised with one third tubular plate or reconstruction plate. This will offer more rigid fixation with less chances of loss of fixation and may allow early mobilisation depending on stability of fixation. External fixation is used by some authors, but it will require the distal fragment to be big enough to hold at least two wires. Also pin tract care and compliance in young child is always an issue with this method. The decision will depend on the size of the bones with smaller bones doing well with K wires and older children requiring plate fixation. Screws with wire loop fixation was reported by French, but there a high chances of loss of fixation with this method. Reconstruction plates have been successfully used with minimal risk of loss of fixation.
We prefer a reconstruction plate fixation of the osteotomy to work well with minimal risk of loss of fixation.

What are the Problems/Complications of cubitus varus correction?
The main complications are lateral prominence, incomplete correction, loss of correction, nerve palsies, infection and re-operations [33,34]. Lateral prominence was reported in French osteotomy due to prominence of distal fragment laterally. An equal limb oblique osteotomy minimises this issues. Medialisation of the distal fragment may also reduce the lateral fragment prominence [27]. In a recently published studies of French osteotomy it is pointed that the lateral prominence does remodel in younger children (less than 11 years of age) [35,36]. Dome and step cut osteotomies do not have issues of lateral prominence.
Incomplete Correction is generally a complication of incomplete planning and execution and is not a function of selecting the osteotomy. It is reported in 5.9% of patients [33]. Loss of correction is a function of kind of osteotomy and type of fixation used. As mentioned earlier screws with tension loop wires will fail if the medial continued is compromised. Similarly fixation with smooth K wires have more chances of loss of fixation.  Nerve palsies have been reported in about 2.5% of cases of cubitus varus correction osteotomies with decreasing frequencies of involvement of ulnar, radial and median nerves [33]. Almost 78% of these palsies are temporary and recover. Nerve injuries are more commonly seen in dome osteotomies with minimal risk in distraction osteogenesis [33]. Overall complication rate for osteotomies is reported to be 14.5% with poor results are seen around 12% cases [33]. Most complications are seen in cases with K wire fixation and lowest overall complication rate is seen in external fixation. However external fixation patients have highest rate of infection. The complexity of osteotomy does not affect the overall complication rate but specific complications may be more with certain osteotomies, like nerve injuries in dome osteotomies.

Our Management protocol
We advise surgical correction of all cubitus varus deformities but decision is to be made by the patient and parents after informed discussion about advantages and disadvantages. We prefer a lateral closed wedge oblique equal limb osteotomy using a lateral approach. Osteotomy is planned preoperatively taking into account the ulno humeral angle and clinically the carrying angle. Intraoperatively the wedge is resected and osteotomy is closed (Fig 1). Limb is aligned and carrying angle is checked. If the limb is still in varus, the osteotomy is extended to achieve >5° of carrying angle. Fixation is done using 3 or 4 hole reconstruction plate. Postoperative ???
Rehabilitation
Special situation
In cases where there is avascular necrosis of the trochlea or physeal arrest of the medial physeal plate, epiphysiodesis of the lateral physis is needed (depending on calculations of growth potential of the child). In such cases the supracondylar osteotomy needs to be combined with epiphysiodesis (Fig 2). 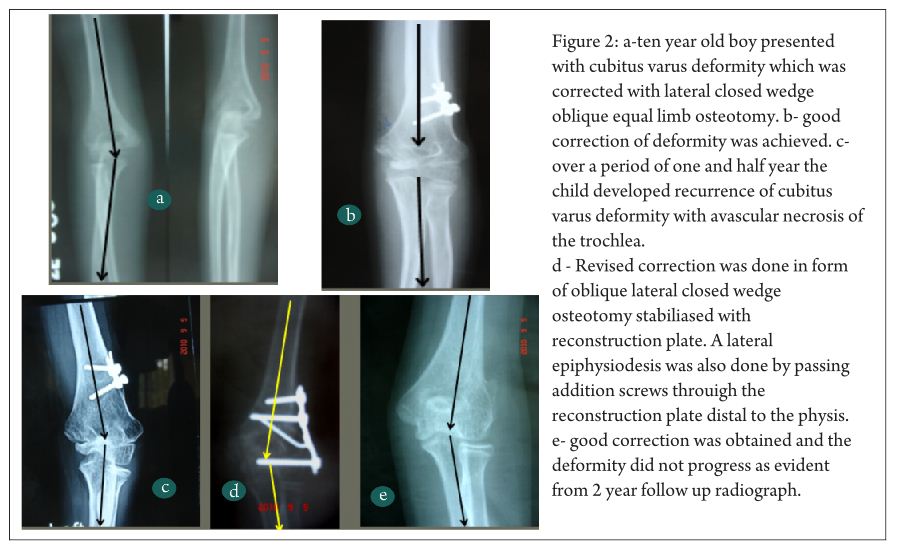 Conclusion
Cubitus varus deformity requires surgical correction or may lead to various consequences like secondary fractures, lateral instability and nerve palsies. Lateral closed wedge osteotomy is a good method to correct the deformity. Appropriate stabilisation preferably with plate and screw will minimise complications. Surgeons should be aware of complications and should counsel the patients for the same. The lateral bump index post correction and the appearance and placement of the scar are the two variables which may affect the cosmetic aspect of the correction and should be considered while decision making. 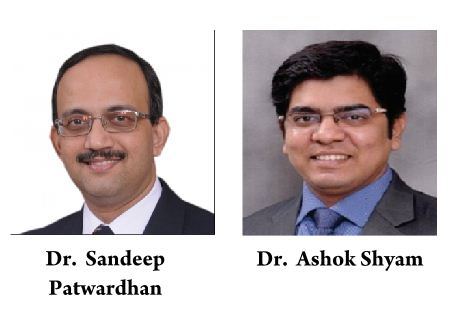 Controversial Issues in Closed Reduction and percutaneous pinning of Supracondylar...
Scroll to top