The evolution of treating this anomaly is a journey of learning; learning to reform or substitute for nature’s glitch: one of changing paradigms in treatment with a constant reality check at every juncture in terms of complications and recurrence.
The story about the deformity radial hemimelia, radial dysplasia, radial dysmelia or radial club hand as we popularly refer to it is neither new nor too contrasting if we study it carefully looking both backwards and forwards. Paediatric orthopods, hand and plastic surgeons alike have been laboring painstakingly to better their own efforts at recreating the missing elements over the centuries to its contemporary garb (Fig. 1). It is one of those complex congenital anomalies the exact genesis of which is not completely clear but the treatment of which sees a confluence of three major branches of reconstructive surgery. 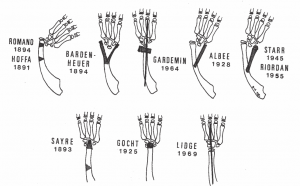 Hence we have put together a special anniversary issue, the best known thinkers and experienced surgeons on the Indian scenario as well as extra special contribution from Boston children’s hospital as bonus: masters who are adept at their techniques and have penned down words of wisdom in great detail in the forthcoming chapters. Since the subject is multifaceted, vast and complex we have divided it into two issues.
Part 1 which deals with the evolution ,treatment and preliminary surgeries in infancy and toddler age group and part 2 which deals with the early and late childhood treatment of radial hemimelia and other issues. I would urge the reader to pay attention to the structuring of both these issues and delve into the depths of each sub topic ,as it has been put together with a great deal of thought .
One of the major milestones surely has been the rational concept of radialisation, early surgery, retaining growing cartilage and early pollicisation and that is why it has withstood the test of time. Distraction techniques have been another value addition to the changing face of modern day radial club hand treatment. I congratulate Prof Bhaskaranand and Dr Binoti Sheth for an exhaustive chapter about natural history, treatment and long term outcomes. The focused section on etiology and pathogenesis is albeit a little narrow in scope but by no means trivial and both the lead authors Dr Anirbaan Chaterjee and co-authors have done a commendable job of the same.
The chapter on pollicisation is both a brilliant compilation of literature review as well as lucid technique guide for the senior and junior surgeons alike; a task not as simple as it seems to achieve. Dr Thatte takes the reader elegantly through a surgical technique that truly defines the word reconstruction. The succinct expose by Dr Don Bae offers a thought provoking fresh perspective paving the way for yet another change in the management of this multi focal deformity. Our issue would have been incomplete without these two astute writers.
Before signing off I would ponder on the thought –whether in future genetic engineering and the much hyped concept of stem cells can bring about a dramatic change? My humble submission is that if it has taken centuries for surgeons to a arrive at as complete an approach as possible to the surgical management ,it would be wishful thinking that one can start playing God so soon in the near future.

People forget how fast you did a job—but they remember how well you did it.
–Howard W. Newton
And finally as the guest editor in chief in my chapter, I have endeavored to recount in a simplistic fashion the approach and technique that works best in my hands as that is the bottom line and to my mind a decision that matters the most clinically. 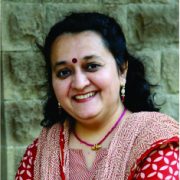