You are here: Home / Vol 7 | Issue 2 | May-Aug 2021 / The Evaluation of Deformity Correction in Idiopathic Clubfoot During Ponseti...

Background
We graphically analyzed the correction of total Pirani and Dimeglio scores and their subcomponents at sequential casting sessions for children with idiopathic clubfeet.
Methods
Correction of scores at weekly sessions was represented graphically. The tenotomy effect was accounted for separately. We classified 1st to 3rd casts as early, 4th and 5th cast midlevel, and beyond 5 as final casts to describe casting treatment.
Results
A total of 88 clubfeet (34 bilateral) in 54 patients were studied. Both total Pirani and Dimeglio graphs were characterized by a steep fall in early casts; subsequent minimal improvement in midlevel and final casts; later marked correction with tenotomy. Equinus in both scores stood as the most resistant deformity, showed full correction only following tenotomy. Dimeglio graphs captured coupling of various foot motions better over early casts than Pirani graphs.
Conclusions
Both Pirani and Dimeglio scores can adequately guide caregivers to progressive deformity correction in clubfoot.
Keywords: Clubfoot, CTEV, Pirani, Dimeglio, Scores, Graphs 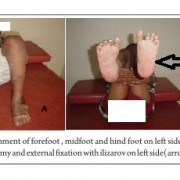 Treatment of Neglected and Relapsed Clubfoot with Midfoot Osteotomy: A Retrospective Study

Should we Continue to Screen for Developmental Dysplasia of the Hip in Clubfoot? Our Experience and Review of the Literature

Subscribeto RSS Feed
Should we Continue to Screen for Developmental Dysplasia of the Hip in Clubfoot?... May-August 2021
Scroll to top